A replay of the 1970 baseball season using Diamond Mind Baseball.

The following article is based upon the simulation results from my replay of this particular baseball season using Diamond Mind Baseball. The article may be based upon actual events, but statistics and some dates are altered to fit the replay results. 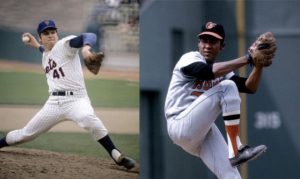 Orioles’ southpaw Mike Cuellar was named Pitcher of the Month for the second time this season as the 32-year-old joined teammate Dave McNally was baseball’s first 20-game winners for 1969. Cuellar won the award in April when he opened the season with a perfect 5-0 mark, a 1.89 ERA in 38 innings. In August, Cuellar topped that with a 6-0 record and a minuscule 1.23 ERA in 66 innings. Mike now leads all of baseball with a 1.99 ERA. Cuellar’s workload helped him beat out Washington’s Joe Coleman who was 5-0 in August with an even-more impressive 1.17 ERA for the monthly though only over 43 innings of work. Coleman combines Dick Bosman who won Pitcher of the Month honors last month to give Ted Williams a solid mound presence to go with his developing sluggers.

In the National League, the Mets have surprised all by remaining in contention through the summer. Tom Seaver was a big reason why as the 24-year-old righthander went 4-1 with a 1.59 ERA and 43 strikeouts in 51 innings. The Mets were an impressive 20-11 in August and were deadlocked with the Pirates at month’s end. Seaver beat out Cincinnati righthander Gary Nolan who came off the disabled list to post a 5-0 record in August. In 43 innings, Nolan recorded a 2.30 ERA.